Alice owns Alice's Fitness and Dance in Sturbridge, MA.  She has been teaching Zumba and Dance Fitness classes since 2012 and has been dancing regularly in shows and competitions since 2014.  Her specialties are pole dance, aerial silks, and burlesque, all of which she teaches at her studio!  Alice led and choreographed a burlesque troupe in regular shows for a short time at Mohegan Sun, and put on her first full burlesque and aerial show for Christmas 2019.  Her 2020 show was, unfortunately, postponed due to the pandemic, but she is excited to get it up and going again! 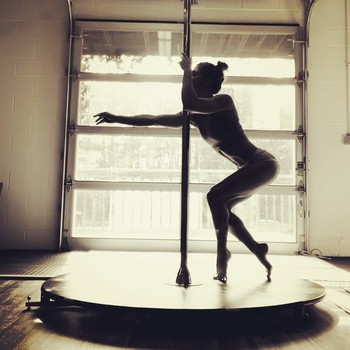 Anabel began performing professionally in 1960, and since then has acted and sung in night clubs, theatres, festivals and museums. Anabel is currently one half of The Proper Ladies, and their alter egos, The Bawdy Ladies. She, along with two friends, created the original Bawdy Ladies' Book cassette in the 1980's.

She is an accomplished actress, with many theatrical and TV credits. Anabel appeared as Mrs. Merriman in the award winning HBO mini series, Olive Kitteridge, played Ruth in Island Zero, and is features as Phyliss in Free Guy, currently playing in theatres.  In 2022 she will be seen on Netflix in The Mothership, a sci-fi film starring Halle Berry.

She has devoted much of her life to the study of voice and was a Fulbright scholar in the 80's, studying vocal techniques in Bulgaria. 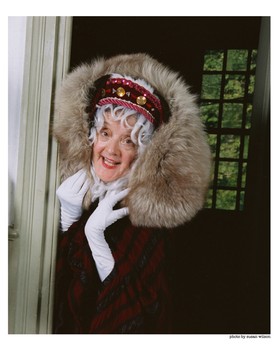 I have almost a decade of experience being on stage involved in musical theater. I am a triple threat who loves to be in the spotlight! I also have six years of cosplay experience, inuding costume and prop construction.

Ava Fox is a Boston-based performer. 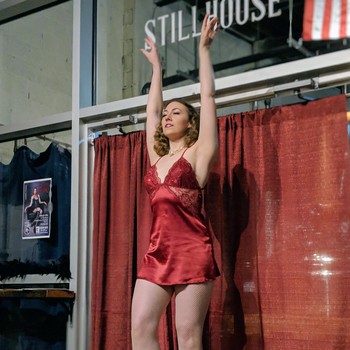 Teacher - The Strategy behind the Sizzle
Teacher - Belly Dance Basics 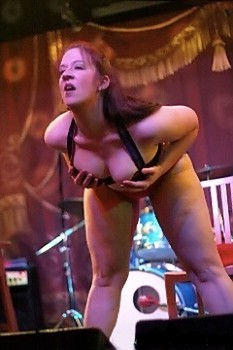 Just 44 and a half feet shorter than The 50-Foot Woman and as sexually attracted to frogs as Miss Piggy, this Iowa City-based beauty is the silliest name in sapphic burlesque. She's the co-producer of Bawdy Bawdy Ha Ha burlesque — she’ll steal your socks and knock your heart off — she's just a little askew — she's Catty Wompass! 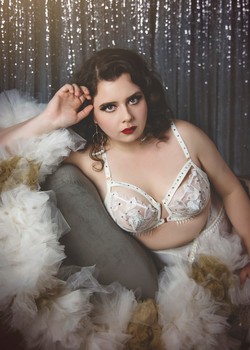 Teacher - Curves R Us: Underthing Creation for the Plus Size Dancer

Della-Kate Flower is the creepy love child of the Hoggetowne Burlesque & Drag Alliance. With four years of performing and three years of producing under her shimmy belt, The Giant of Jiggle has spread the belly love all over the southeastern U.S.!  She is your Florida Burlypicks 2019 Master of Lip Sync and Improv, and producer of Purple Nightshade Productions! 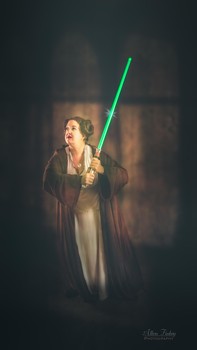 A lover all things dark, mysterious, strange and unusual. A promoter of feminine prowess, and attracted to all things shiny. Burlesque was a natural draw for her, and she hopes to share this love with the world...one clothing removal at a time. 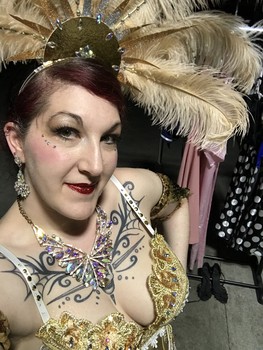 Teacher - Get On Your Knees & Blow: Stage Kittening for Everyone

Guilted Lilly has been described as "a classically trained Siren who can switch from musical theater to jazz standards at the drop of a hat." With the face of an angel, the mouth of a sailor (convenient, given her Siren-like voice), and curves that would make even the Goddess of Love herself swoon, this multi-faceted flower of the evening is sure to surprise you. Along with her onstage appeal, she is an expert Stage Kitten who has worked with new performers and legends alike, and is always trying to raise the bar by showing that Stage Kittens should be (and are) a great deal more than just sexy outfits and picking up clothes. Lilly is the co-founder and artistic director of Shakesperotica, a whimsical combination of two of her favorite art forms: Shakespeare and burlesque! When she's not onstage, she enjoys helping the tech experts hang lights, build sets, run cables (she loves a good crawl under a stage), and is always available to help with a quick costume fix. She speaks French, volunteers at a parrot sanctuary, buys glitter ten pounds at a time, and loves to frolic. Lilly has a miniature poodle named Loki and two greenwing macaws named Isaac and Hayes. She makes floral headpieces out of naturally shed parrot feathers, and could talk about parrots for days. She also happens to strongly dislike talking about herself in the third person. Lilly spells her name with three Ls. 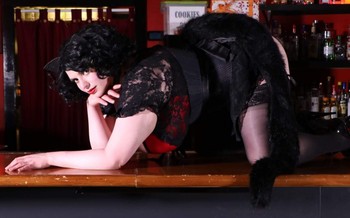 Iridessa Blossoms is an Internationally known Performance Artist and is making her way around the world one show at a time. She has been stimulating audiences with her unique expression and artistic concepts in variety shows for close to a decade. She is known for her pop n' lock isolations and hybrid style of belly dance. She is multi- talented and her signature style is broad, diverse and ever-changing. While struggling to find her place in belly dance, she found her community while attending the annual burlesque conventions, The Great Burlesque Exposition and Burlycon. She is the founder and former producer of Poppin' Cherries and Eclectic~ Ka and owner of Creative Motion Dance! With her distinguished hips that tease and signature moves that please, she dances effortlessly in an unreal fashion. Sultry and sassy...transforming your senses to a place that is ethereal. Bridging the gap between worlds and transcending time and space, she is a magical goddess in motion! When she is not lighting up the stage you can find her frolicking with fairies. 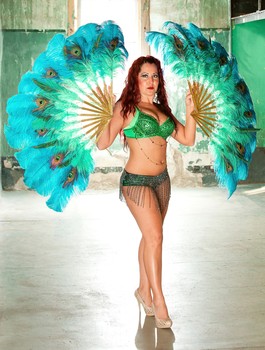 After the job market for glamourous archaeologists dried up, Miss Mina Murray abandoned her Ivory Tower and turn to the art of the striptease. She is a co-founder of The Boston Beautease (formerly The Boston Babydolls) and Headmistress of the Boston Academy of Burlesque Education (B.A.B.E.). Known as "The Educated Ecdysiast" and "The Martha Stewart of Burlesque", she recently published "Miss Mina Murray's Little Book of Better Burlesque". 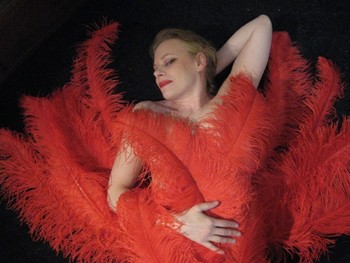 Scratch is the founding chair of The Great Burlesque Exposition, the director and producer of BeauTease Burlesque (formerly The Boston Babydolls), and the Curator of The American Burlesque Collection.  An experienced performer and producer, Scratch is regarded as an expert in promotion, act creation, the history of burlesque, and the diverse aspects of putting on a show. 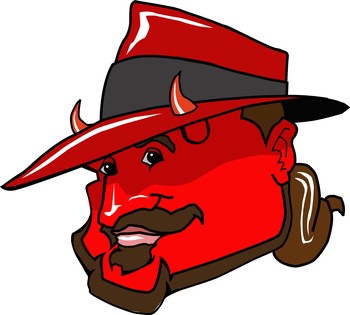 Red Velvet, a life-long dancer, has performed in musical theater and burlesque throughout the U.S. and internationally.   Red Velvet is proficient in various dance forms and teaches classes in burlesque, cancan, and Isadora Duncan dance.    Red Velvet is co-artistic director of a monthly show, DIVA or Die Burlesque, and is artistic director of the cancan troupe, The Velvettes.  She has performed with the award-winning Hot Pink Feathers and award-winning Flaunt Follies, Bombshell Betty’s Burlesqueteers, Alegria Samba Dance Company, and was artistic director for the dance group Pretty, Pretty Please.   Her burlesque performances have won Judge’s Choice at the 2019 Arizona Burlesque Festival, Most Classic at the 2016 Great Burlesque Exposition and Most Humorous at the 2014 Great Burlesque Exposition.  She co-created five full-length burlesque/cabaret/theater productions: Rebel without a Bra, At the White Rabbit Burlesque, Hotel Burlesque, Just Another Zombie Holiday Show, and Dollhouse Monsters.  She loves bringing her crazy ideas on stage for your enjoyment.  Come and Try a Slice of Red Velvet! 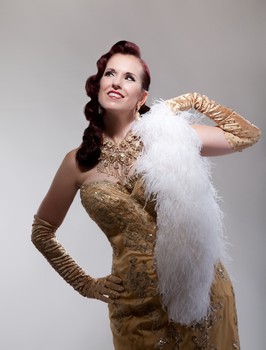 Scarlett Letter has been dazzling the world since 2004 and stunning them even longer. A long time fixture of the Los Angeles Burlesque scene, Scarlett has graced stages across North America and Europe and has won several awards along the way. Also a costumer and producer, Scarlett is known for a dark cold beauty reminiscent of Hollywood Noir and the classic Hitchock heroine.

"With 4 feet of red hair and miles of bad intentions" 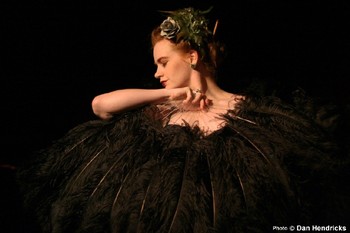 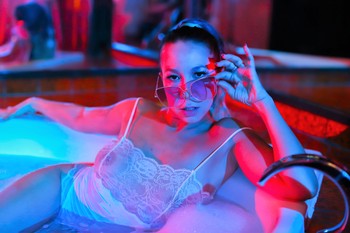 Suprema de la Rouge is a German native, and the Fraulein with a fine Hein. This Jane of all trades is a burlesque performer, as well as Marketing Coordinator and Stage Kitten for DIVA or Die Burlesque. Before Covid, she was a crew member of the BABE Cooperative, and also helped out at other shows all over the Bay Area. A world traveler, redhead by choice, dress enthusiast, and lover of colors, flowers and sparkles, she is the Bay Area’s Babe with the butt and the bling. 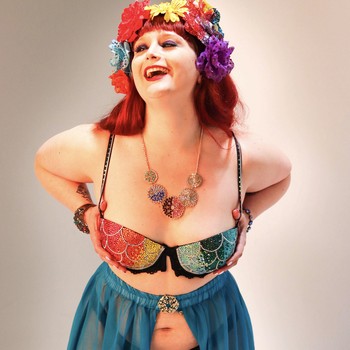 Venus Whiper is a Boston-based performer with background in theatre, costume construction, cosplay, and pole dance. She has recently undertaken an aprenticeship with Beautease Burlesque. 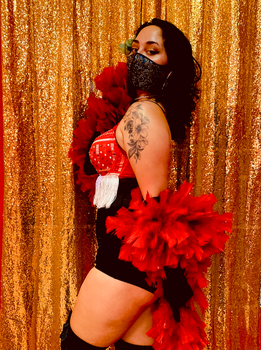 The world’s foremost teacher of, and pioneer in, reconstructing the Delsarte System of Expression, used by the early theater choreographers to create the Broadway styles (including the Ziegfeld Follies). Joe's teaching has taken him around the world and he is proud to have taught Delsarte at the National Centre of Dance in Paris, at the Juilliard School, and also at numerous Middle Eastern dance festivals across the US. A great lover of burlesque for many years, he created and regularly performed a stripping gorilla burlesque for several years in Ohio in the late 1980's. Now he looks forward to teaching at the Great Burlesque Expo every year that he can and lends his support to the revival of this beloved, charming art. 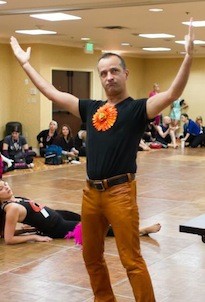